It's been a while. Back to some topology—we're almost ready to state Poincaré's Conjecture.

Consider drawing a curve on the surface of a object. If we view the surface as a topological space then the curve can be thought of as a set of points in the space with the following property: there exists a continuous function from a closed interval on the reals to that set. 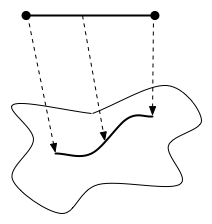 Note that there are an infinite number of continuous functions that result in the same image and vary only in the choice of parameterization.